Fire Sprinkler System – Looking From the Inside Out

Fire Sprinkler System – Looking From the Inside Out 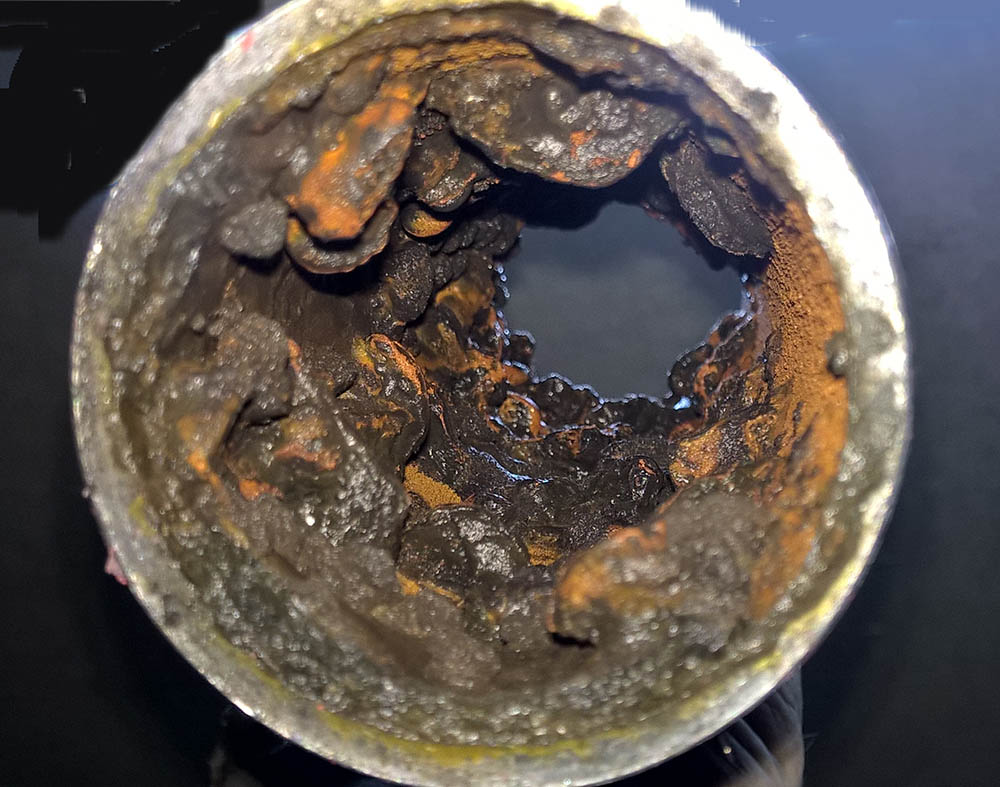 Do you love our picture, it has a certain volcanic, interplanetary look to it I think. It is, in fact, the inside of a sprinkler pipe, which is just over 30 years old.
Boring I hear you say!
Well, if you’re a metallurgist its fascinating and if your commercial building owner its actually quite uncomfortable, especially if it has come out of your building.

Picture this, you have a circa 1980’s building. The asset manager is a legend because the building is performing well, and by that I mean the yield is above expectations and the tenant retention is stable, even above average, compared to the building’s 1980’s peers.

Diligently the costs and income are reviewed; in the expense budget there is a repeat cost for fire trucks which keep getting called at circa $1500 a time, and then there is a fire system repair shortly after for circa $2000. As you revise the figures you notice a trend of this item in the ledger of $3500 with cost fluctuating, but the description is always similar. The frequency of this budget item has been increasing over the past twelve months.
Why are spending this money frequently, are the fire system guys not doing a good repair. What is physically happening in the real world?

The fire sprinkler guys are doing a great job, their repairs hold, it’s the pipe that is fatigued and keeps springing leaks in different places, without warning. The leak, as you can see in the photo opposite, starts as a tiny pin hole, and then it grows. Its not the big rush of water you might imagine. It’s a drip, the keeps on giving. The result is the water pressure drops in the pipe and the system will automatically call the fire brigade.
So the repairs are made for the leak, the sprinkler system pumped back up to pressure again. The Automatic call system for the fire brigade is reset and everyone goes back to their life.

About a week, maybe three weeks later, the event reoccurs but, is somewhere else in the pipe run. We can’t see the inside of the pipe, and the pipe is mostly in the ceiling cavity space above the tiles out of sight. Its like an ice berg under the water line, about to hit the side of the Titanic. 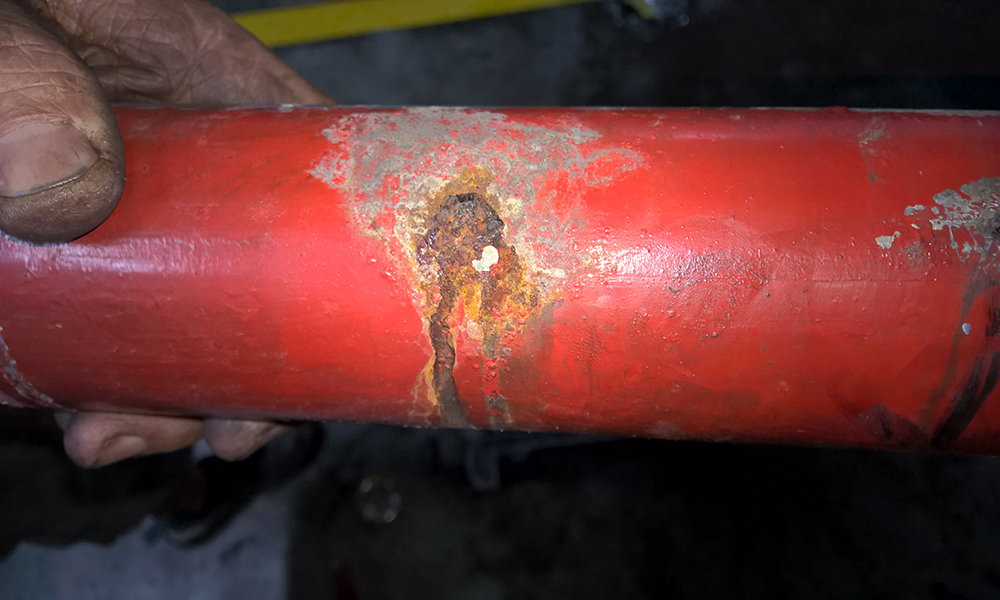 The same length of sprinkler pipe but from the outside

So we have a leaky boat, but not a boat with one big leak like the Titanic, but a boat with a honey comb of leaks. Picture an old 1970s car wrecked in the paddock, all the panels are rusted and full of random and indiscriminate holes. The sprinkler pipes aren’t that bad, but, that’s where were’ heading. And to make the situation a little more frustrating, it is difficulty to see the extent of the “honey comb” because the damage works it’s way from the inside out. See our first picture above.

So your 1980’s 16 level building which is running a NABERS rating of 3.5 and a water rating of about 3 could potentially have a significant cost associated with it. Should you keep on band aiding the leaks and off load the building, should you keep the building for the long term to recover the costs and make the repairs, should you have a ”fire sale” (yes the pun was intended) or are their alternatives? 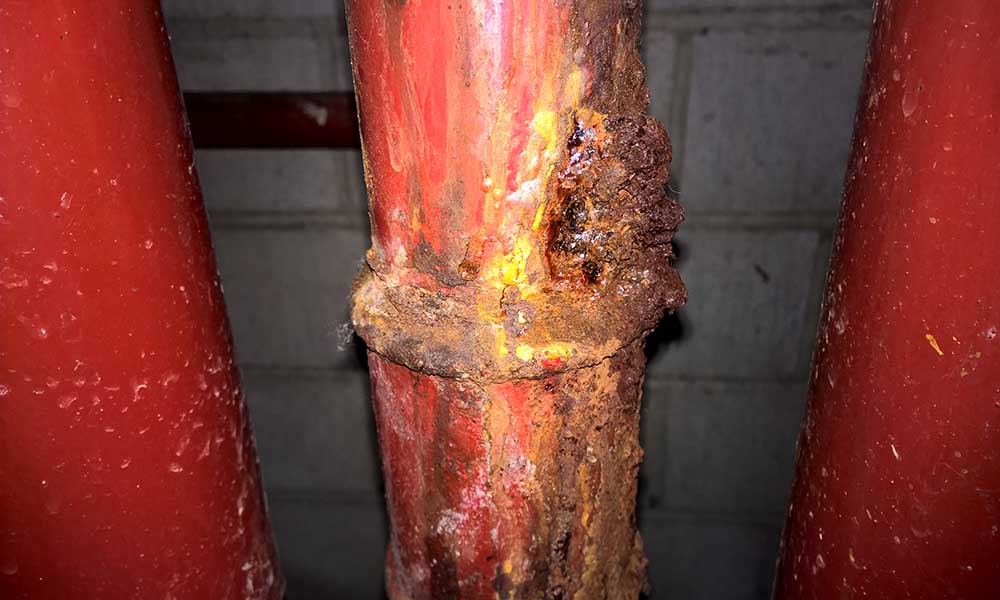 The problem is not going away, you’re going to have costs to “band it” while you manage the logistics of a total and permanent repair, which will last the next 30 years.

Is the system safe? There are several “band aids” in place, but will the sprinkler system protect life, as it was designed to do, or will it just fall apart in a genuine set of conditions where the system is maximized to protect life and property. To answer this, you really need a consultant, keeping in mind they are likely to err on the side of caution.

Should you choose to a full retro fit of the entire sprinkler system, managing the tenants and ensuring there is minimal interruption to their business operations is a part of your considerations. Ceiling tiles and ceiling grids will need to be removed for several days in different areas while the sprinkler system replacement works proceed. And, the building sprinkler system still needs to have a certain amount of operation while the building is occupied.

The Tip of the Ice Berg!

There are all sorts of other considerations in this is well, this is just the tip of the ice berg (apologies for the third titanic reference). Our point is not about the repair, our point is about the considerable direct and in direct cost of a problem that was essential out of sight (and out of mind) until the budget was reviewed and we asked the question why.
The Logistics and urgency of the problem is really separate, we have just offered an example here for a little dramatization and provoke thoughts for the potential costs involved. The truth always lives in the figures.