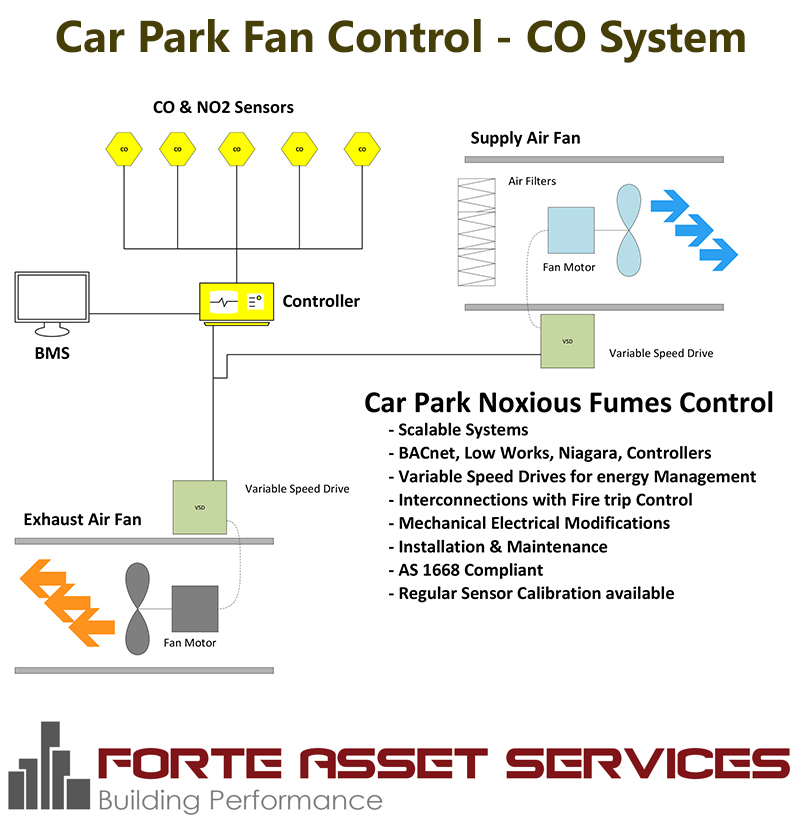 Effective and Economical Control which is Compliant to AS1668
The Co System process is logical and seamless.

Every Car Park is different, typically, a return on investment is with one year.

We Are Using a Time Clock on Our Fans!

Time clocks are non-compliant with AS 1668, you either run the fans full time, during car park operation hours, or install a sensor based controller such as that outlined in the diagram above.

Do We Have to Install Variable Speed Drives?

No, the variable Speed Drive (VSD) will save you considerable dollars on start up of the fans. each time a Direct on line (DOL) fan starts it draws circa three times its full run current. Commercial building are typically charged at this high level because the wholesaler of energy has to deliver a network which can supply these higher amounts of current, even if it is just for a short period. Check with your energy retailer for more information and specifics to your building.

What is the Cost

The cost of the system is subject to several main parameters including (but not limited to) the following:

We have a Building Management System

Connections to the BMS don’t have a huge effect on price subject to the BMS having an Open Communications Protocol or a proprietary one.
With an “Open Protocol” system such as BACnet, Lon Works, and Niagara, the connections are relatively straight forward and a graphic page is set up.
We would recommend connections or integration into the BMS as it will make trending energy use versus car park fan use much easier, offering greater analysis of your buildings operational systems.

The Carbon Monoxide sensors need to be calibrated every six months as per AS1668. The core reason for this is most Co Sensors have a component which is “sacrificial” over time and needs to be replaced periodically for the system to function effectively and safely.